The French 75 cocktail Champagne and Gin based cocktail originating in France. The cocktail is also know as the 75 Cocktail or the Soixante Quinze (meaning Seventy Five in French).

Its origin dates back to the first world war and said to have got its name from a French 75mm field gun. This is because the combination of ingredients was said to have a kick like it felt being shelled by the powerful weapon.

The French 75 cocktail is similar to the Tom Collins cocktail with Champagne replacing the soda water. 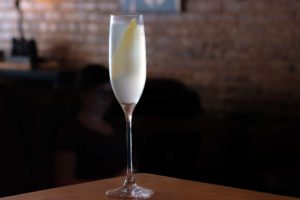 The cocktail is served straight up without ice and can be garnished with a sprig of lemon skin.